skip to main | skip to sidebar

BEDOUIN TEXTILES FROM THE COLLECTION OF JOY TOTAH HILDEN 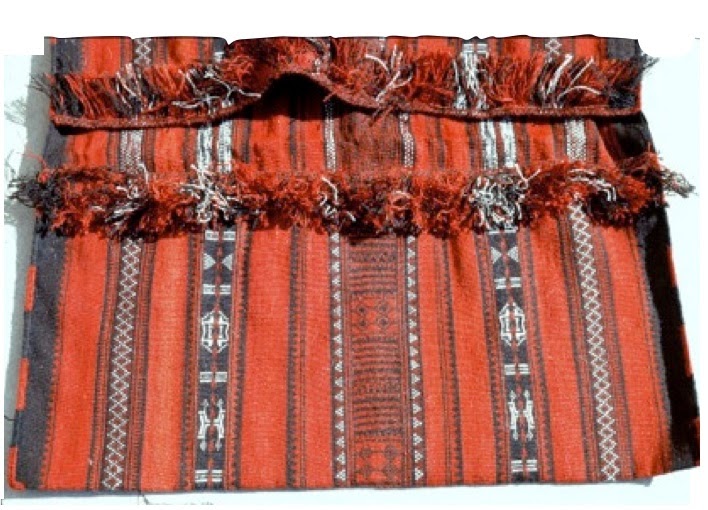 Talks & Lectures, and part of Society For Asian Art

Portable and practical, tough and colorful, Bedouin textiles played a vital and functional part in the life of the Arab nomads. Produced on the simplest ground looms, the textiles were long-wearing and beautiful. The Bedouin women – the true craftspeople of the desert – wove to provide the very fabric of day-to-day living. Joy will describe the weaving techniques of the Bedouin as they adapt from their ancient nomadic existence to a settled one. She will also talk about her research and travels in Saudi Arabia. Her work comes at a time when many tribal peoples are losing their cultural traditions.

Joy Hilden is an acknowledged authority on Bedouin textiles. Her work is based on first-hand knowledge gleaned over a 12 year residence in Eastern Saudi Arabia and extensive travels throughout the Arabian Peninsula and the Middle East


Bedouin Weaving of Saudi Arabia and its Neighbors is an important contribution to the documentation, understanding and appreciation of the material culture of nomadic tribal communities in the Arabian Peninsula. Joy Totah Hilden has undertaken an exhaustive study of the weaving and using of the tent and other household objects made by Bedouin women. Much of her research is based on a dozen years of fieldwork, however she presents a thorough scholarly basis and builds upon the work of other noted Arab specialists such as Abu Lughod, Dickson, Doughty and Weir.
Background information on Bedouin lifestyle is essential to understanding the importance of the woven objects. When compared to other communities, relatively little has been written that realistically presents the particulars of the Arabian nomadic life. Hilden relates that in pre-Islamic times the term 'Arab' "seemed to denote tribally organized, tent-dwelling camel nomads, noted for their warlike qualities and their emphasis on kinship" (p. 19). This succinctly describes the people now known as Bedouin. Hilden explains that "Paramount values in the society are pride of lineage, honor, family and tribal solidarity, generosity and open-handedness, and fierce independence" (p. 19). Hospitality is also of prime importance and Hilden's book details how the weavings are used to provide shelter, comfort and a welcoming atmosphere as well as communicating important information through the symbols used in the weavings.
Chapter 3 discusses the various areas where Bedouin weavers are found and details Hilden's personal interactions with many of them. These intimate portrayals of home visits, weaving stories and personal interactions are a rare and wonderful aspect of this book and open a window onto a seldom seen world. Hilden presents fascinating details on the Bedouin women's place in their society. Unlike their sisters, she says, who are settled and reside in towns and cities, they have a large degree of freedom and play a vital role in their tribe. Women's weavings are essential to the Bedouin lifestyle and are a matter of pride for the family as visible evidence of skill. It is a medium both useful and beautiful. Unfortunately, many of these skills and knowledge of traditional methods is disappearing as the nomads settle into permanent communities. Hilden recounts that natural dyes and fibers are being replaced with more easily available and easier care synthetics, or mass manufactured mats and cushions.


Hilden's book finely details the history of Bedouin weaving which is a task in itself as many of the tribes speak their own colloquial language. Her particular expertise in both craft textiles and Arabic, and the fact that she is female provided unique access to Bedouin women, which, she says, would have been challenging if not impossible for a male researcher.
Bedouin Weaving is lavishly illustrated with concise illustrations and beautiful photographs. Hilden clearly explains the entire process, stating "In earlier times, Bedouins made much of what they needed themselves, using every resource at hand" (p. 14). Wool fiber is collected from the tribe's own herds of goats, camels and sheep. The fiber is then hand spun into yarns using drop spindles, the design of which dates back centuries. She quotes anthropologist Klaus Ferdinand, "No other appliance is used as much as the spindle. It accompanies women and young girls wherever they go" (p. 123). The advantage of this type of spindle is its easy portability. The natural white, black and shades of brown fiber are used and additional colors such as red or orange are obtained by dyeing the yarn, using madder root, toadstools and various other plant materials. Increasingly, Bedouin women use commercial dyes in the mix with natural dyes. Hilden includes the dye recipes of several weavers in Appendix 5.
Once a weaver has spun sufficient yarn, she sets up a simple loom on the ground using only four rods and four tent stakes. She then weaves strips of cloth with a variety of patterns called wasm. Wasm are tribal symbols which indicate ownership of animals, used on free roaming camels and used on other textiles to proclaim tribal identity. The symbols are generally basic geometric shapes well suited for weaving. Hilden describes and illustrates how the pieces are next stitched together into larger pieces for use as the tent or other items.
The Bedouin way of life is disappearing. "The number of nomads in the Arab world has decreased dramatically in the 20th century," Hilden states; "Some continue to weave, but the lifestyle that gave birth and purpose to the weaving is fast disappearing, the victim of industrialization, government control and international conflicts" (p. l). Bedouin Weaving provides unique insight into that way of life. It is useful to scholars and weavers, but accessible enough to be interesting to the general public.

An audience of more than 100 people was given an illustrated presentation last week by Joy Totah Hilden, the visiting author of a comprehensive book on traditional Bedouin weaving, on the subject of her research.
The presentation took place at a meeting of the Qatar Natural History Group. (click here to continue reading ...)
Posted by Joy Hilden at 5/04/2012

"Bedouin in the Big City" by Tracy Hudson

Please see an excellent article by Tracy Hudson, "Bedouin in the Big City" in Spinoff Magazine, Spring 2012 issue, pp. 48 -51. Tracy learned how to spin and weave from a Bedouin woman in Doha, Qatar, and through referencing Joy's book on Bedouin Weaving.

Joy Hilden went on a tour to Saudi Arabia and Qatar April 5 through April 21st. Lectures and other events were scheduled by private heritage organizations. The subject was Bedouin weaving, cultural heritage, and her book, Bedouin Weaving of Saudi Arabia and its Neighbours.
She visited Riyadh, Jeddah, Al Jouf, the El Qasim region, the Asir region and Dhahran. She visited Qatar under separate auspices.

For a full description of the tour with accompanying photos, please click: Lecture Tour to Saudi Arabia and Qatar

Joy Hilden
Joy Totah Hilden has been doing field research on Bedouin weaving since 1982. Her new book, Bedouin Weaving of Saudia Arabia and its Neighbours, is now available for order. With her husband, who taught in the Eastern Province of Saudi Arabia, she traveled near and far in search of weavers whose knowledge of this fast-disappearing craft she wants to preserve.